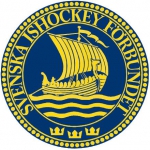 J18 Nationell is the highest Under-18 league in Sweden. It is played from January to March.

J18 Nationell is divided into two divisions with 10 teams in each, North and South.

The teams start the season in J18 Elit. J18 Elit is played in 4 divisions, North, East, West and South. The 5 best teams in each qualify for J18 Nationell