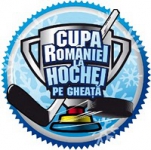 Two 3-teams group playing a single round. First team of each group advances to final four, second team plays a single match against 3rd of other group. to advance at final four with semi-finals and final

Sport Club Miercurea Ciuc/Csíkszereda win Romanian Cup 2015-16 beating 3-2 Steaua Bucharest in the final played in Brasov. The game was the replay of the original final, scheduled on 20 december 2015 at Gheorghieni ice rink and suspended after second period with score 7-2 for Miercurea Ciuc due to a short circuit. It's the eighth trophy for Sport Club.

The final of Romanian Cup between SC Miercurea Ciuc and Steaua Bucharest, played at Gheorgheni arena, was suspended after the second period due to a short circuit to the lighting system which caused the explosion of two reflectors and a fire. The firefighters decided to evacuate the spectators from the rink. Given the impossibility to guarantee the repair in a short time, Federation decided to reschedule the game for a future date to be determined. At the moment of suspension the score was 7-2 in favour of SC Miercurea Ciuc. In the bronze game, Dunarea Galati won 7-6 at overtime against host Progym

The moving of Finnish coach Kari Rauhanen from MOL vice champion Corona Brasov to Dunarea Galati of Romanian League was the shocking transfer of the summer for Romanian hockey. After three months and only two official games played in Romanian Cup (one victory one loss), Dunarea announced Rauhanen was fired without further comments

Rain of goals in Romanian Cup

After a spectacular match in front of 2.000 spectators ASC Corona Brasov won the 2012 Romanian Cup defeating 3-2 home side HSC Csikszereda. In the bronze match final title holder Steaua Bucarest defeated 3-1 Dunarea Galati.
This is the first ever trophy in club history
For the first time in Romanian hockey a skating rink was filled with teddy bears, which were donated to a charity foundation.
Review all Romanian Cup stats and results on eurohockey.com

What to expect from the Ice Hockey World Championships 2021

Men’s ice hockey World Championships 2021 are only few weeks away so we at Eurohockey.com dived into it and explored what to expect from the tournament. Read more»