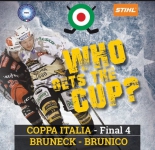 - only Serie B teams admitted
- three groups (North, West,East) playing home/away round robin
- The winner of each group and the best runner up advance to superfinals

Valpellice Bulldogs surprisingly wins its second Coppa Italia (Italian national cup), after the premiere in 2012-2013, by beating current league leader and trophy holder SV Renon 4-3 in the semifinal and host Val Pusteria 3-1 in the final in front of 1800 spectators. It's the first trophy for Valpellice coach Tom Barrasso. Val Pusteria reached final beating 2-1 Asiago in the other semifinal

On Saturday, 5th of December and Monday, 7th of December, the eight Serie A clubs will compete in the Coppa Italia quarter finals. The winners of the two-game-series will qualify play the Final Four tournament between 12th and 13th of December. Following are the matchups in the first round:

In a beautiful atmosphere, in front of 3.600 spectators in Milan, SV Renon keep Coppa Italia won last season by beating Milano Rossoblu 4-2. It's the third national cup for current Italian champion. Renon won 3-2 at overtime against Val Pusteria in the semifinal, while Milano Rossoblu earns a spot in the final winning 6-2 against Valpellice

Italy National team forward Robert Sirianni was the star in Coppa Italia final, played in a sold out Pala Tazzoli in Turin. He scored 4 goals and served one assist in Valpellice's 7-3 victory against Alleghe.
This is the first ever trophy for the Bulldogs

Turin will host Italian Cup Superfinals on January 12 and 13.
Semifinals will be Alleghe Tegola Canadese - Renon and Val Pusteria - Valpellice. The winners will face for the final on Sunday 13. The first 4 teams in Serie A after half of total rounds are qualified for Coppa Italia Superfinals

SG Cortina surprisingly wins Coppa Italia beating Bolzano 4-3 at shoot-outs in Final Four played at Bolzano's Palaonda. In semifinal Cortina won 2-1 in overtime against favorite and Cup holder Val Pusteria
This is 3rd National Cup for Cortina after the victories in 1973-74 and 1974-75

Sweden’s SHL championship: Enjoying a game and getting the most out of it

There are a few reasons Ice Hockey has taken the world by storm in recent decades. Namely, the improvement of the sport and the refinement of the culture that surrounds and props it up. ... Read more»