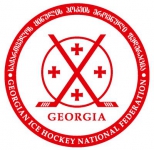 Fiery Crusaders Tbilisi stay at the top of Georgian League after the end of spring stage, played in the city of Batumi, where is located one of two regular size rink of the country. Last December the icerink roof collapsed due to the abundant snowfall endangering the activities, but local government repair it in some weeks.
Before the last stage, helding in May, Fiery Crusaders is one point ahead of Mimino Bakuriani and Grey Wolves Tbilisi, while champion Ice Knights is last, 10 points behind Fiery Crusaders

Fiery Crusaders Tbilisi won the Georgian Championship Winter Stage played in the town of Bakuriani. Tbilisi team finished with same points of Grey Wolves Tbilisi and home team Mimino, but is ahead due a better goal difference. Champion Ice Knights finished last with just one victory. Next round will be played in March in Batumi

Georgian Federation re-elected the Board

During the congress members of Georgian Ice Hockey Federation have re-elected the Board and its 5 members: Nugzar Paikidze, Zakaria Khechuashvili, Alexander Vashakidze, Ilia Davidov, Mamuka Shergilashvili. According to the by-law the Board was eligible and therefore voted to elect President (Mr. Nugzar Paikidze), Vice-President (Zakaria Khechuashvili) and General Secretary (Mr. Alexander Vashakidze) of the Federation.

The new SHL season is underway

Home loss for the 2021 champion on the opening day of the Swedish league. Read more»